skip to main | skip to sidebar

Feast of the Lantern 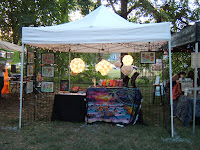 Every year, at Spades park on the eastside of Indianapolis, there is an outdoor show that let the artists show/sell their arts from noon to 11 pm. At dusk, hundreds of lanterns are lighted throughout the park.
One year, I had a few lampshade kits that come in pieces and when put together, accordingly, they look very pretty at nite. People will line up to buy the lampshades from us. This is good because I made so much money selling them, at the same time, they are not handmade item. I just put them together, add the light and sell.
This year I don't have high hope, people walk around, looking and said they were just looking but didn't have any money to buy.
My son came and went. He had to go dance at the even downtown. The neighbor were laughing because he stayed for 20 min., bought a bar of soap and left. It's Ok, I thought, I didn't think I'll be very busy. But I was wrong.
I think people are still buying, but more of the functional objects, not paintings, not jewelry. My neighbor sold soap she made in her kitchen for $5 and it went crazy. Her soap is 100% Vegan. It's so trendy, I even bought one that has Dandelion as one of the ingredient.
I sold a few ankle bracelets. That was enough to cover the booth fee. Without those lampshades, I would have spent 12 hours in the park, not making any money. May be I should start making soap. We all have to use soap, right?
Recently on Facebook, I am able to contact my nephews in Thailnad and talk to them. Both are the starving Artists who are trying to sell their arts and crafts at the fair. One is selling a stuff Teddy bear and one is selling candle and tea that his Japanese wife made. They both are graphic designer.
Imagine if I could go home now and or have my nephews here, we will share a booth and I won't be abandon in the park, at midnite, all by myself.
Posted by Silastones at 1:42 PM 5 comments:

I asked my husband to buy me a bag of Potato chip, he came home with Lay's

Original Potato Chip. I told him I don't like Lay's, I want Ruffles, the one with wavy. Next he came home with Lay's Wavy. Love you too, honey.
Today I mixed Pardo Professional Art clay -Translucent with a bit of Pardo Jewelly clay - yellow and came up with this Ruffle Potato Chip ring.
I am very please with the Pardo clay and having fun with it. It holds the shape while sculpting and very strong after bake.
Posted by Silastones at 7:27 PM 7 comments:

Last week, me and my Polymer clay friends volunteer to help Miss Lisa Pavelka during her classes at CHA, so off we went. Thursday nite, I pulled up the chair from my room to the other room, and we talked, and we laughed, just like having a slumber party all over again.
The next day we arrived and was asked to help at Viva-Decor's booth. As you might have known, they are the distributor of Pardo clay. I ended up at Mr. Amando's booth did t

he demo using Pardo clay with the Jewelry Blanks that they are selling. Back and forth between Armando's booth and Miss Lisa P.'s table while she took a break and talked to others, we feel in love with paints that Viva-decor has. http://www.viva-decor.us/
I've been watching and wanting to buy their product, but it seems like they are hard to find. We talked to the owner who had no idea how desirable their products are to all crafter, not just clayer, I hope pretty soon we can buy the whole product line here, in US, somewhere.
It had been a great experiences helping in class, booth sitting and demo. Viva-Decor and Miss Lisa P. had been so generous with the sample, as well as Mr. Amando, who finally realized that he should give us some samples. So, here's is his web site. They has so many "Blank" we can use, especially rings :) http://www.amatestudios.com/

Viva-Decor had launched a new Pardo Professional Art-Clay and I got to take some home to play with. Here is the glass I covered with translucent clay. The new clay are stiff, not soft like Jewellry clay, which suitable for canning. I am pretty happy with it. May be I will make some canes tomorrow.

Here are some rings I made yesterday. Using jewellry clay - Fossil Wood. Clay is easy to work with but I am still adjusting. I've been using nothing but Fimo for all these years. I also used some paint on there. It is a paste almost like Rub n' Buff.

This ring I used some paints from Viva-Decor. I love all the colors, they are so rich and shimmering. I want them all.
Thanks you Miss Lisa P. and Viva-Decor for the opportunity and a good reason for me to get out of the house. Thanks for my friends who had been there and always there for me. Thanks for wearing my jewelry and showed them off at CHA.
We stopped to have dinner at Polish restaurant. It is a buffet, so yum-yum. I had something that my mom used to make for me when I was young. Thanks Kathy for such a good memory.
Posted by Silastones at 6:22 PM No comments:

Newer Posts Older Posts Home
Subscribe to: Posts (Atom)
Welcome to SILASTONES; my Polymer Clay World.
Here you will find pictures of my work, how the ideas came about and how I put them into works. I also have tutorial blog to show you step-by-step of how I made my Polymer Clay beads. Also another blog where you can read all about my daughter, Ada..
Thanks for stopping by.
Ponsawan

P.S. These days, I spend most of my time taking care of my daughter, Ada who was in a car accident on March, 2008. I haven't posted here for a while but will try to share my work here again, as much as I can.

Me, myself and I

Silastones
Indianapolis, Indiana, United States
I started making Polymer clay beads in 2005. I sold my first batch and started sending them out to the bead stores and bead shows. I started a blog to share my experieces with polymer clay and started a tutorial blog to show how I make some of my beads.