skip to main | skip to sidebar

Yes I did. Why? Because the idea of me making up a project and send it to the publisher so it will get publish and I will be able to collect some money for my idea, seems like I have to do some work, lots of work and I just want to play. I have saved up a few projects, took pictures and wrote down the instruction, but I have never send them in. The though of holding it back for 6 months or a year till they get published seem like an eternity. Then the new idea became an old idea and I wouldn't care more or less about it.
I will dig them out and post them on my blog, just like before.
Sorry I have to break up my promises, but I have to follow my heart.
So I will start today with how I covered the tin

I covered the tin with a sheet of Green clay, then pinched out a tiny bit of clay (with finger nail)and rolled it into a tiny ball, rolled it into a tiny snake, and kept rolling on one side till I get a point. Then I used the needle to picked up each one and push it into the base. I called this "Katherine Dustin Wanna be" process.

Next, I made a dandelion (I'll show you how I made it later), some leaves, a tiny house, a lady bug, some stone path and stuck them on the base. Filled the entire surface with green grass.

For the tiny pebbles, I pinched out a tiny piece of clay from different color clay, rolled into tiny balls and flatten them lightly. Lined them up randomly. With my finger, I pressed lightly on to those pebbles (they will stick to finger), then pressed them on to the side of the base.

The Monarch butterfly is the cane made by my friend, Scott. I cut a thick slide off the cane, trimmed off the translucent around it, stuck a small copper wire into it, pushed the other end into the dandelion 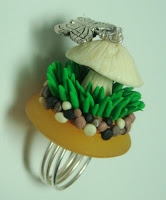 . Called it "The greener grass on the other side of the fence" and I won.

Maureen Carlson, my table mate called it "The Who's House". So I made a matching ring with a mushroom on top where the "Who" family went camping this summer.

I hope you like it. Now that I feel much better, please come back because I have more to share.

I know what you mean about waiting so long for a book to come out, and by the time it does it's old news. That happened to me, sort of! I've been waiting for a book I illustrated to come out since 2007!

Newer Post Older Post Home
Subscribe to: Post Comments (Atom)
Welcome to SILASTONES; my Polymer Clay World.
Here you will find pictures of my work, how the ideas came about and how I put them into works. I also have tutorial blog to show you step-by-step of how I made my Polymer Clay beads. Also another blog where you can read all about my daughter, Ada..
Thanks for stopping by.
Ponsawan

P.S. These days, I spend most of my time taking care of my daughter, Ada who was in a car accident on March, 2008. I haven't posted here for a while but will try to share my work here again, as much as I can.

Me, myself and I

Silastones
Indianapolis, Indiana, United States
I started making Polymer clay beads in 2005. I sold my first batch and started sending them out to the bead stores and bead shows. I started a blog to share my experieces with polymer clay and started a tutorial blog to show how I make some of my beads.